Elise Rodriguez, 51, has made her own way for as long as she can remember. A single mother of three, she’s worked long hours over the years to put food on the table and to be an example of perseverance and resolve for her kids.

But like millions of other Americans, the rug was pulled out from under her feet in March when she was laid off from her job as an office manager due to the coronavirus pandemic. Rodriguez was stressed, but she knew the unemployment insurance she was entitled to as a taxpayer would help ease the financial burden.

What she didn’t expect was weeks of mental anguish caused by not knowing if or when she would ever receive those benefits. The hundreds of calls she would make to New York’s labor department each day in hopes of getting an update on her case. An outdated and overwhelmed system without answers. The exhausting oscillation between guarded optimism and hopelessness.

It’s been more than five weeks since Rodriguez filed her initial claim and she said she hasn’t received a dime from New York state.

“It’s very frustrating because you’re at the mercy of another organization and it’s beyond your control,” she added. “I’ve always been very independent. These circumstances, it really breaks you down.” 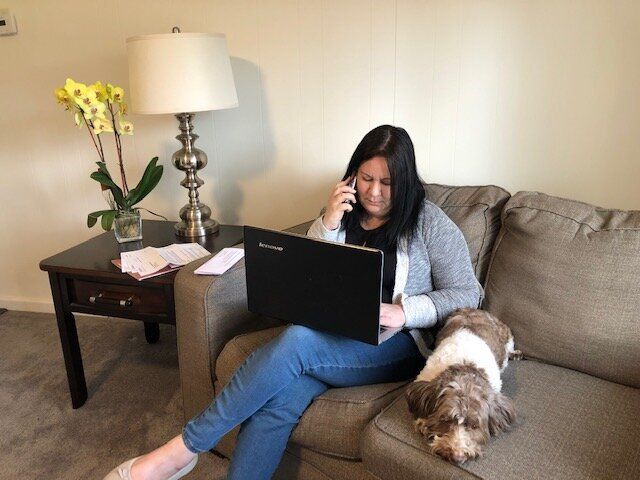 HuffPost heard from dozens of Americans across the country ― from California to Florida, New Jersey to Michigan ― who described the same maddening process of trying to get unemployment benefits during the pandemic.

Many struggled to reach the unemployment offices to get answers. Some emailed local lawmakers for help. All of them are being let down by a system meant to support them at a time when they need it most.

Marco Nieves, a 36-year-old dog groomer in Brooklyn, has likened the busy signals and automated prompts that lead nowhere to “mental abuse.”

“It’s exhausting,” said Nieves, who’s been out of work for nearly six weeks. “There’s all these walls and errors. … I feel paralyzed and frightened because there’s no timeline.”

“I’m at the point where I just don’t know what to do,” said Nikia Davis, 33, who was laid off from her job as a clinical assistant at a mental health center in Wisconsin in late March. “There’s a lot of uncertainty and money is just like dwindling.”

More than 33 million Americans have filed jobless claims since mid-March, marking a surge of unemployment this country hasn’t seen since the Great Depression. The Coronavirus Aid, Relief and Economic Security (CARES) Act enacted in late March boosted benefits by $600 per week, lengthened their duration by 13 weeks, and also extended eligibility to those who don’t typically qualify for traditional unemployment benefits, including people who are self-employed or are seeking part-time jobs.

But some state’s labor departments, which may be understaffed and rely on antiquated software, have struggled to update their systems and respond to the crush of new claims.

A spokesperson for the U.S. Labor Department acknowledged in a statement Friday that “some claimants have faced challenges in getting their claims filed” due to the surge in claims, and noted that each state has its own process for handling requests.

To help with these issues at state unemployment offices, the Department of Labor has distributed more than $800 million in emergency funding and is providing guidance and support, the spokesperson said. 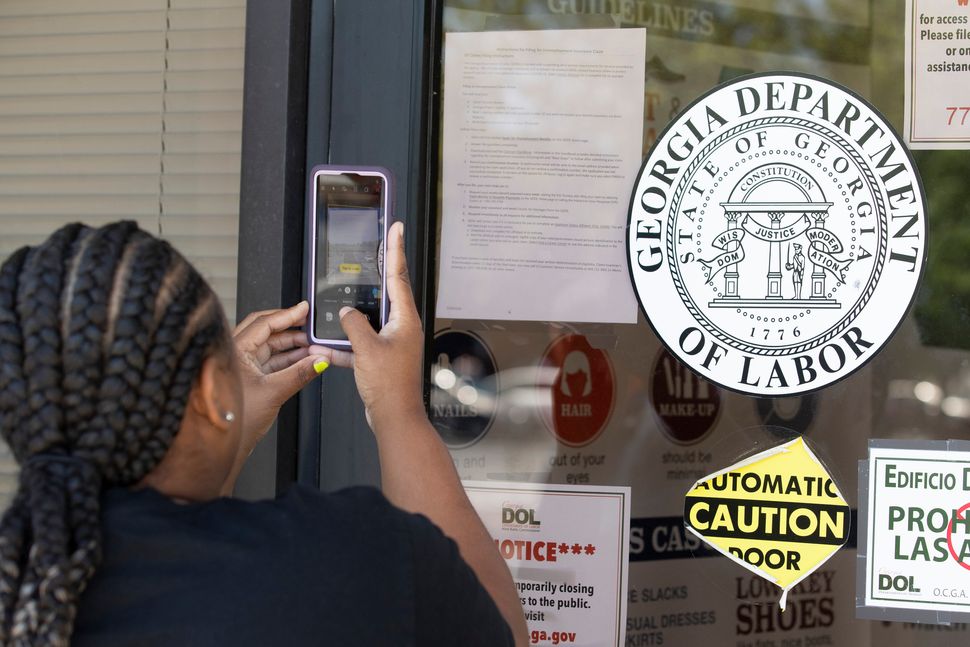 But 19 states are still not sending out benefits to newly eligible categories of workers, according to the Labor Department’s latest figures. Sen. Ron Wyden (D-Ore.), a member of the Senate committee that oversees unemployment insurance, told reporters Thursday that Labor Secretary Eugene Scalia should be on the phone to states every day asking how to help.

“The secretary has a bully pulpit and he sure as heck isn’t using it,” Wyden said.

Along with unemployment benefits, the CARES Act devoted $290 billion for federal economic stimulus checks to be paid out directly to households. Depending on their income, Americans could receive up to $1,200 as well as an additional $500 per dependent child under 17 years old.

Americans started to receive stimulus payments in mid-April, which have reached 130 million households so far. Rodriguez said she finally received hers this week. She isn’t sure whether to pay bills with it now or stow it away in case she needs it for provisions in the future.

Like Rodriguez, who was essentially living paycheck-to-paycheck before the pandemic, Jessica Rummage in Kentucky has nearly depleted her savings while waiting for her unemployment benefits to come through.

Rummage, 39, said she’s rarely able to connect with anyone from her state’s labor department, but receives conflicting information when she does. She hasn’t had any income since she was laid off from her job at the end of March.

“The anxiety in our home is through the roof,” she said. “We’re rationing things like bread and eggs and pasta and toilet paper.”

Rummage has been living with her 18-year-old son, who was also laid off from his job amid the pandemic, and her parents. She worries about her dad, who is 66 years old, diabetic and suffering from prostate cancer.

“He has hospital bills,” Rummage said. “Time is running out for us. Our savings can only go so far.”

“I had to go get SNAP benefits so we don’t starve,” she added, referring to the federal nutritional assistance program.

Jesse Baylis, a 34-year-old living on Long Island, said the stress of losing his retail job, receiving no unemployment checks and being late on bills all while homeschooling his two young sons has been monumental.

“My mental health has taken a huge turn for the worse,” he said. “It wouldn’t be so hard if I would actually get the unemployment I was approved for. I feel as if I am at the edge of a ledge and I’m never going to take that step back and be able to provide for my family.”

The mental health impacts on a person experiencing job loss and uncertainty over unemployment benefits could be significant, said Dr. Felix Torres, special adviser to the American Psychiatric Association on the United Nations.

“The reality is that all of us are living in this heightened state of anxiety right now, not only from the fear of contracting COVID but also from the general disruption to our lives,” Torres said. “Add to that the additional stressor of job loss and the uncertainty about whether the benefits are going to come in, then that’s further going to exacerbate the person’s level of anxiety.” 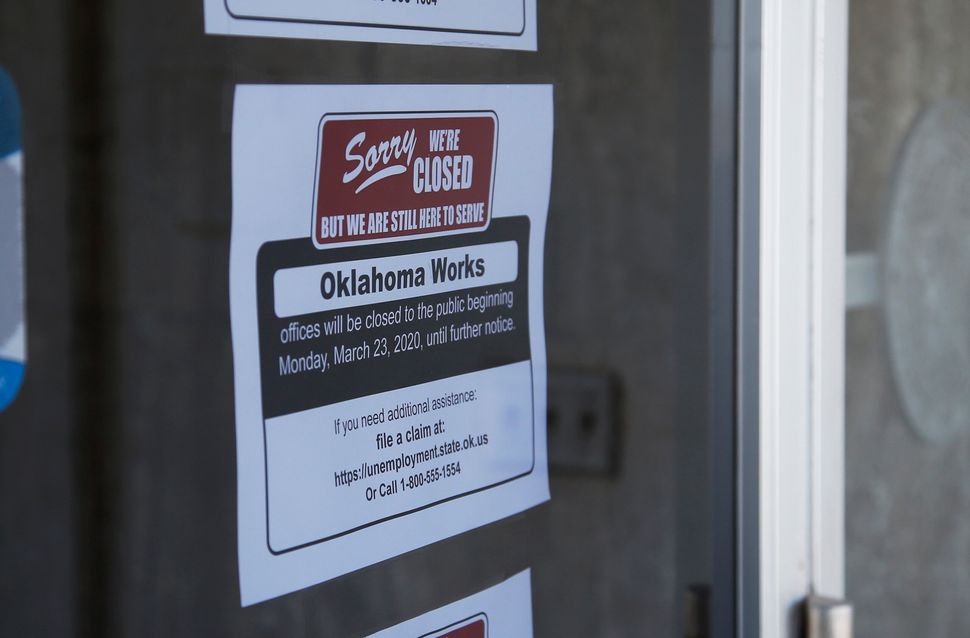 People should be mindful of the symptoms of depression and anxiety, which can include irritability, feelings of sadness or detachment, poor appetite and trouble falling asleep.

“We need to look at those symptoms, which can surface rather quickly or that can sort of be underneath the surface and insidiously pop back up,” Torres said.

Michaela Gates, 40, in Oklahoma said she hasn’t been able to sleep more than two or three hours a night since being laid off from her job in early March. Her husband, who works in the oil and gas industry, has been furloughed.

She struggled to make progress with her claim despite repeated calls to the unemployment office, and tweets and emails to local representatives and labor department officials.

“I’m worried that we won’t be able to keep a roof over our children’s head and that we will lose everything,” said Gates, who has six children ― four of whom still live at home.

“We have jumped through hoops for weeks,” she said Wednesday. “It’s mentally draining.”

Desperate for answers and support, people have turned to Facebook groups.

Dial 9 to go straight to an operator, one person advises. Call as soon as the labor department opens, another recommends. Call your local representatives. Tweet at the unemployment office. The list of advice goes on.

Several people told HuffPost that both the tips and the sense of camaraderie they’ve received from the groups has been helpful. But the desperation from some group members can be worrisome and upsetting.

“I swear to GOD that I’m going to snap! They don’t release payments. They don’t answer email. It’s impossible to even get into the queue because the system disconnects your call,” wrote one Facebook user in New York. “I’m almost out of money.” 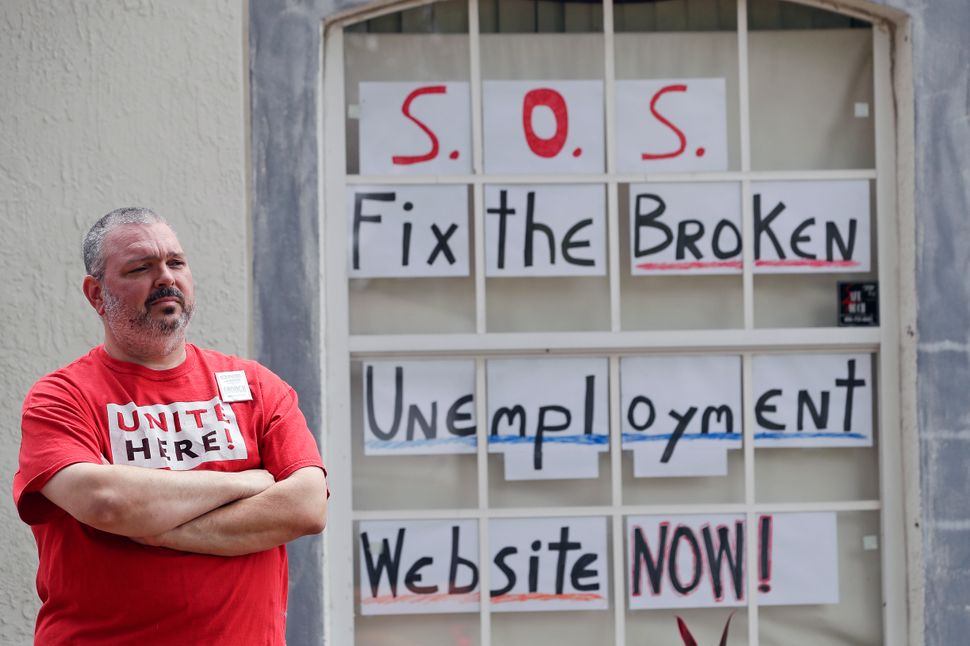 “Within minutes of waking up this morning out of nowhere I just broke down and started crying,” wrote a Facebook user from Florida. “I am so overwhelmed by this whole thing. I am a single income household and besides the stimulus I haven’t seen a dime. … I’m usually able to stay strong minded but I feel myself breaking.”

What’s more, some members of the Facebook groups worry they’re being preyed upon by scammers. One woman in New York told HuffPost she believes someone called her pretending to be from the labor department. The caller referenced her comment in the Facebook group and then asked for her social security number.

Actual Labor Department representatives will verify a few things to prove their legitimacy, including the date you filed your unemployment claim and the type of claim you filed. But the woman said the caller never did that.

‘Just Keep Going And Don’t Give Up’

Claimants who have received their benefits after weeks of waiting compare it to winning the lottery. For seemingly no rhyme or reason, after endless phone calls and website refreshes, their claim is suddenly approved.

On Thursday morning, Gates was pleasantly surprised to find a portion of her pandemic assistance had finally been approved in the system. She’s hopeful the money will be available in her bank account within the next few days. But she worries it won’t be, given everything she’s been through.

Her focus now is on all the other people who are still desperately seeking answers. Her sleepless nights are often spent trying to find resources for other people going through the same thing.

If you or someone you know needs help, call 1-800-273-8255 for the National Suicide Prevention Lifeline. You can also text HOME to 741-741 for free, 24-hour support from the Crisis Text Line. Outside of the U.S., please visit the International Association for Suicide Prevention for a database of resources.