Even Super Bowl weekend couldn’t push Apple Inc. (NASDAQ: AAPL) entirely out of the news. This time, though, the big weekend surprise came from South Korea.

Automaker Hyundai Motor Group, including Kia, is no longer talking with Apple about building an Apple Car, according to a report from Bloomberg citing “people familiar with the matter.” This was a hot story last week.

Hyundai’s Kia division builds cars for the U.S. market in Georgia, and the reported discussions between Apple and Hyundai centered on building an autonomous (self-driving) Apple Car there. Kia would have invested in an assembly line and Apple would have provided the design and the technological horsepower. Hyundai already has its own electric vehicle, the Ioniq, and may have been unwilling to give that up in order to compete with itself by building cars for Apple.

Now, the door to building the Apple Car may open again. U.S. carmakers Ford and GM might jump at the chance to manufacture an Apple Car. Both companies have invested billions in developing their own EVs, and both still have a long way to go before most of those vehicles make it to market. Ford has put its storied Mustang brand on a new EV, the Mustang Mach E, and intends to electrify its stalwart F-150 next year. Adding the Apple brand, even if Ford’s participation could stunt sales of its own EVs, would be a big plus for Ford.

Intel apparently has decided to push back on claims that Apple’s M1 chip is about to take over the world. Well, at least the Mac part of the world.

Tech news website Tom’s Hardware on Friday posted a slide presentation from Intel comparing the Apple M1 with the company’s own Tiger Lake processor (11th Gen). A glance at the following slide shows that the Intel chip equals or surpasses the M1 in a series of productivity benchmark tests selected and run by Intel. The light blue bar is Intel’s 11th Gen chip, the black bar is Apple’s M1. 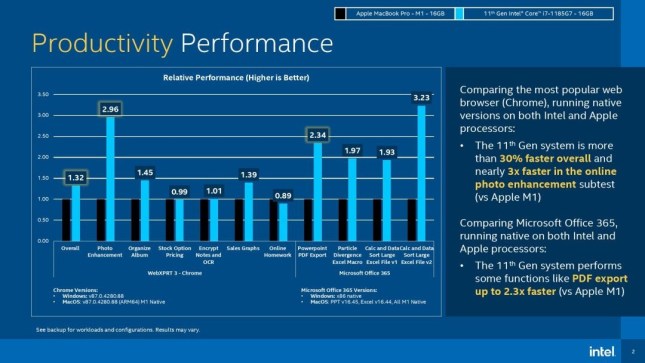 Intel makes a number of other claims about its 11th Gen chip, all showing that its chip is superior to Apple’s. Because the benchmark claims are based on tests either provided by Intel or chosen by the company, it may be wise to take the results with a grain of salt. Stay tuned for Apple’s response. Hardware and software engineers love this stuff.

Apple’s contretemps with Facebook over privacy is spreading to other ad-dependent apps. Last week, Snap and Unity Software both warned that the privacy feature Apple is preparing to launch will have a negative effect on their businesses too. Twitter, which reports earnings after markets close Tuesday, also likely will have something to say about Apple’s new privacy feature.

Unity, which operates a real-time 3D platform that other companies use to develop and monetize content, said it estimates that the new requirement that iOS apps ask users for permission to track them, will cut Unity’s revenue by around $30 million (3% of total revenue) in 2021. Snap’s chief financial officer said the company didn’t know yet what the “long-term impact of those changes may be for the topline momentum of our business,” but that impact is unlikely to be positive.