Australian coal miner Whitehaven is anticipating prices of the fossil fuel in key Asian markets to remain strong for at least the next two years, as economies re-emerge from pandemic lockdowns and a global supply crunch persists.

Whitehaven, one of the nation’s biggest independent coal producers, sank to a $543 million loss during the 12 months to June 30, pummelled by the dual shocks of the coronavirus pandemic wiping out demand and unofficial Chinese bans on Australian coal cargoes rattling the market. 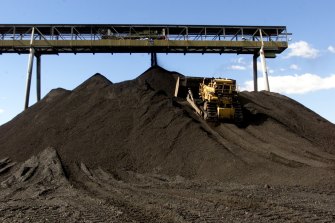 The sector has also been under mounting pressure as global warming concerns cause investors to flee, while the United Nations, ahead of an upcoming climate summit in Glasgow, is calling on all countries to commit to phasing out thermal coal between 2030-40.

But in a sign of coal’s enduring near-term demand, prices for both thermal coal used in power generation and the metallurgical coal that supplies the steel-making industry have been booming this year.

“As each of our customers’ economies are lifting, customers are asking for more tonnes to be brought forward.”

High-quality thermal coal at the Port of Newcastle, the benchmark in Asia, fetched an average $US167 a tonne for the September quarter, up from $US52 during the same period last year. The benchmark metallurgical coal price jumped from $US82 to $149.

As the global energy crunch hits hard in China and drives the Australian thermal coal price even higher, surpassing a record $US230 a tonne this week, Mr Flynn said Whitehaven expected to be debt-free within six months.

“We continue to pay down our senior debt facility,” he said. “We expect to fully repay the debt facility early in calendar year 2022 and be in a net cash position in the March 2022 quarter.”

Mr Flynn said the supply-and-demand outlook suggested the markets could remain robust for at least the “next couple of years”.

Longer-term, however, coal’s outlook in the coming years is facing growing uncertainty as world leaders ratchet up pressure for countries to urgently phase out coal-fired power to avoid the most catastrophic effects of climate change. Top destinations for Australian coal including Japan and South Korea have pledged to hit “net-zero” emissions by 2050, meaning their consumption of coal is eventually set to diminish.

As financial institutions in Australia and around the world retreat from coal on ethical and long-term financial grounds, Whitehaven chief financial officer Kevin Ball on Thursday said he expected Asian lenders would continue to support the company’s growth ambitions.