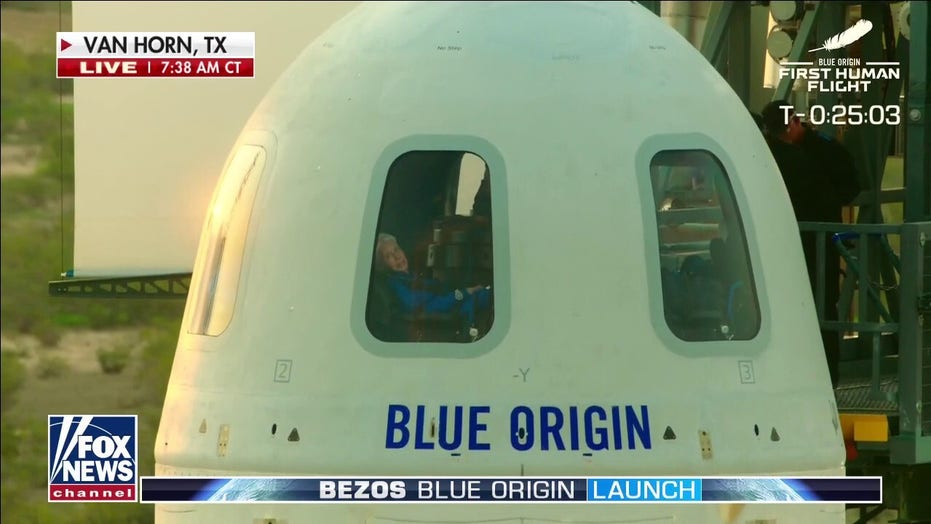 The whole thing lasted 11 minutes, a thrill ride for the wealthiest guy on the planet.

But there was something inescapably exciting about yesterday’s Blue Origin picture-perfect rocket launch and stunningly smooth landing, a triumph of capitalism and American ingenuity.

But just as Jeff Bezos was captivated by seeing the beauty of Earth from the edge of outer space, the mission also propels us to view him in a new way. The man took over cable news for hours by turning the event into a television extravaganza, with lots of subplots and the handing out of truckloads of cash.

There was the indelible image of Bezos, in his flight suit, giving a thumbs-up through the window moments after the capsule touched down in the Texas desert. As he proclaimed it the “best day ever,” there was little doubt that this represented a career pivot and image makeover.

I say this, and pay tribute to Richard Branson’s feat as well, without cynicism. It was a blast to anchor Fox’s coverage of Branson’s Virgin Galactic landing earlier this month. These are two billionaires who could just have gone on making staggering amounts of money.

Now he wants to be thought of as a space exploration guy and says he’ll divide his time between that and his climate change foundation. (Amazon, where he just stepped down as CEO, will run itself? I don’t think so.)

Think about what Bezos wasn’t talking about yesterday: Questionable conditions in Amazon warehouses. Controversy over Post stories or his feud with Donald Trump. And certainly not his extortion allegation against the National Enquirer for publishing stories about his extramarital affair.

In fact, one of his few references to Amazon was to thank the company’s customers, “because you guys paid for all this.” Some of the subscribers may not be thrilled to hear that, but Bezos is free to spend his personal fortune however he wants.

There were many nice touches, as if Bezos had a screenwriter. Taking the oldest passenger into space (82-year-old Wally Funk, an aviator who was unable to join the astronaut program in 1961 because of her gender), and the youngest, an 18-year-old college student. The Dutch student replaced someone who agreed to pay $28 million for the seat.

Bezos also took Amelia Earhart’s goggles on the flight and named it for Alan Shepard, the first American in space.

The normally reclusive man, sporting a cowboy hat, was quite voluble at a news conference that was mainly an infomercial, complete with video, and a handful of press questions. He spoke of the “serene and peaceful” feeling of weightlessness and how he was “awestruck” by “earth’s fragility.” That gave him the segue into an environmental pitch: “As we move about the planet, we’re damaging it.”

And then, the surprise twist. Bezos, who’s had his share of negative coverage, started complaining about “ad hominem attacks,” which are “amplified by social media.” So, since he had television’s attention, he unveiled the courage and civility awards—each accompanied by a $100 million gift to be distributed to worthy efforts.

One recipient was celebrity chef Jose Andres, founder of a nonprofit devoted to providing meals after natural disasters.

The other: liberal CNN commentator Van Jones, who worked in the Obama White House. Jones has done some good work on criminal justice reform, but his caustic anti-Trump rhetoric hardly seems the model of civility. So Bezos was playing to his left-wing leanings. (Even Anderson Cooper, anchoring the network’s coverage, was stunned by this development.)

I’m skeptical that Bezos and Branson are ushering in a new era of space tourism, given the tremendous costs involved. But it’s fascinating to see private companies explore the cosmos, a mission once limited to government.

At a time when the country is consumed by partisanship over everything from vaccinations to infrastructure, Bezos is trying to rise to a higher plateau now that he’s looked down on Earth. Just as John D. Rockefeller and other industrial-era titans gave large sums to colleges and institutions, Bezos wants to follow the Bill Gates path of redefining himself as a man of charitable works.

Whether people buy into Bezos 2.0 or not, there are worse ways for billionaires to spend their money.